The Fresh Face of the Democrat Party, Alexandria Ocazio-Cortez (D-NY), has weighed in on why she has not visited the border during the humanitarian crisis under Joe Biden’s administration as she did during the Trump administration.

Her response begins with:

If you recall, a photo of migrant children emerged in 2018 showing children being detained in “cages” that set off a firestorm of outrage from the Left. Political pundits and politicians were screaming about kids in cages and inhumane practices that separated children from the parents who were caught illegally crossing America’s southern border. 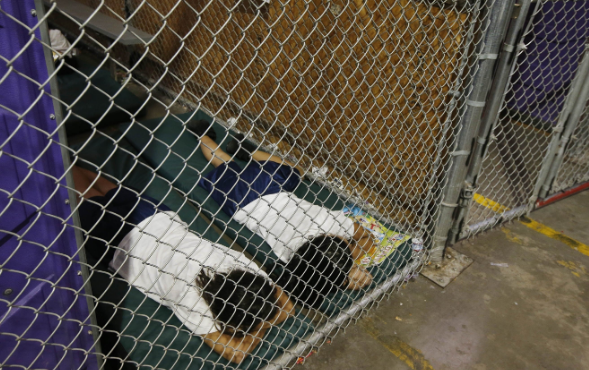 It was soon revealed that the photo in question was taken in 2014, two years prior to Donald Trump taking office, and at a time when Joe Biden was the Vice President of the United States.

This is why, during the final presidential debate between Biden and his soon-to-be predecessor, Trump repeatedly asked, “Who built the cages, Joe?”

Despite this, AOC took the opportunity to visit the border and snap a few pictures of her leaning against a fence as she looks to be weeping into her hands in dismay at what she was seeing.

The Internet was quick to claim that a different angles of the photo reveal that she isn’t looking at detained children, but was looking at an empty parking lot. The argument was made that the entire photo-op was staged to garner an emotional response from the viewer.

Snopes, a “fact-checking” site that often times leans Left, labeled this claim as False due to the their realization that she was weeping before an empty road that led to a tent city where migrant kids were being held rather than an empty parking lot.

Regardless of the intent or motive behind AOC’s 2018 photo shoot, she has been called out for not showing the same concern over a similar humanitarian crisis that has erupted under Joe Biden.

Project Veritas, the investigative journalism organization that previously obtained evidence that the DNC was hiring at least one organization to stage violence at Trump rallies in 2016, obtained photos of the inside of CBP facility in Donna, Texas. In the photos, kids can be seen wrapped in reflective emergency blankets and laying almost on top of each other. This, during a time in which Americans are told they must remain six feet apart at all times due to COVID.

During an Instagram question and answer session, where the Congresswoman is constantly zooming in and out of her right eyeball, one person asked AOC why she was not reacting the same now as she was before.

However, the funniest part about her answer is that she seems to think that the word “surge” is the root word of “insurgence.”

Check out the video below and keep in mind that this person is 1 of only a few hundred people in charge of a multi-trillion dollar budget: