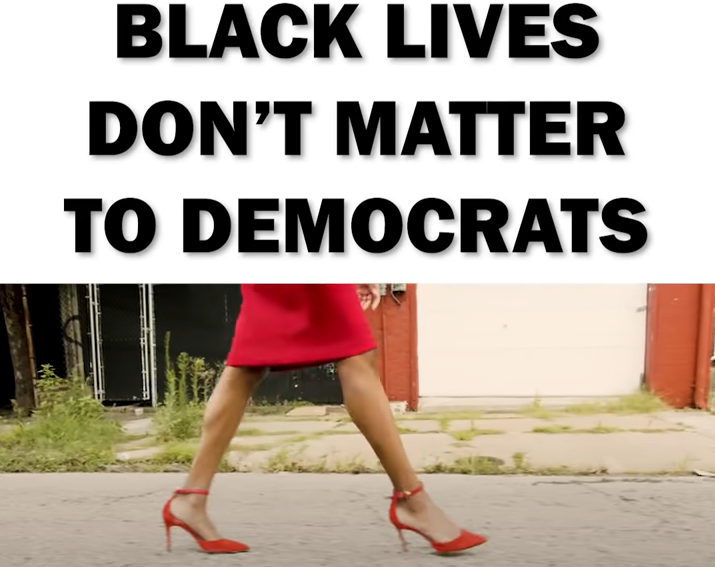 A campaign ad from Maryland businesswoman Kimberly Klacik has been going viral after its first appearance on social media.

Klacik is running for Congress in Maryland’s 7th District to replace the seat formerly occupied by Elijah Cummings.

“Let me remind you that the Democrats have controlled this part of Baltimore City for more than fifty years, and they have run this beautiful place right into the ground.”

During her three minute outreach ad, Klacik paints a grim picture of the current state of Baltimore. Wearing a red dress and high heels, the candidate walks by boarded up and presumably vacant buildings as facts about the city are splashed across the screen. Grass can be seen growing through the poorly maintained sidewalks, vegetation and trees are growing inside buildings, and she walks by piles of garbage and litter.

Above her, throughout the entire video, is the message “Black Lives Don’t Matter To Democrats” in bold letters.

The stark contrast between Klacik’s classy outfit and the impoverished community around her only reiterates the effects that the Democrats have had on the communities that they have been running for decades.

“The worst place for a black person to live in America is a Democrat controlled city.”

From their days of splitting the country in two to ensure that they could keep their slaves to the days of enacting Jim Crow Laws and screening KKK propaganda in the White House (Woodrow Wilson), the Democrats have had a long and sordid history of oppressing and subjugating Black people in America.

It becomes apparent that the Democrat tradition of disregarding the lives of Black people has only continued as we take a closer look at districts where the Democrats have had decades of complete and total control.

It’s seems only par for the course that the Democrats have chosen, for their presidential candidate, a man who has made openly racist comments when not reading from the teleprompter.

Joe Biden once said that a clean, articulate, nice looking Black man was a storybook.

Joe Biden once said that poor kids are just as bright as white kids.

Joe Biden once said that you ain’t Black if you don’t vote Democrat.

You could call these gaffes, you could call this Joe simply misspeaking when he doesn’t have a script in front of him, or you could say that this is just a continuation of the racism that has found a home within the Democratic Party since the days when Democrat President Andrew Jackson created the Trail of Tears.

Klacik has received an endorsement from President Donald Trump and even spoke at the Republican National Convention.

More information can be found about congressional candidate Kim Klacik on her website: Kim For Congress