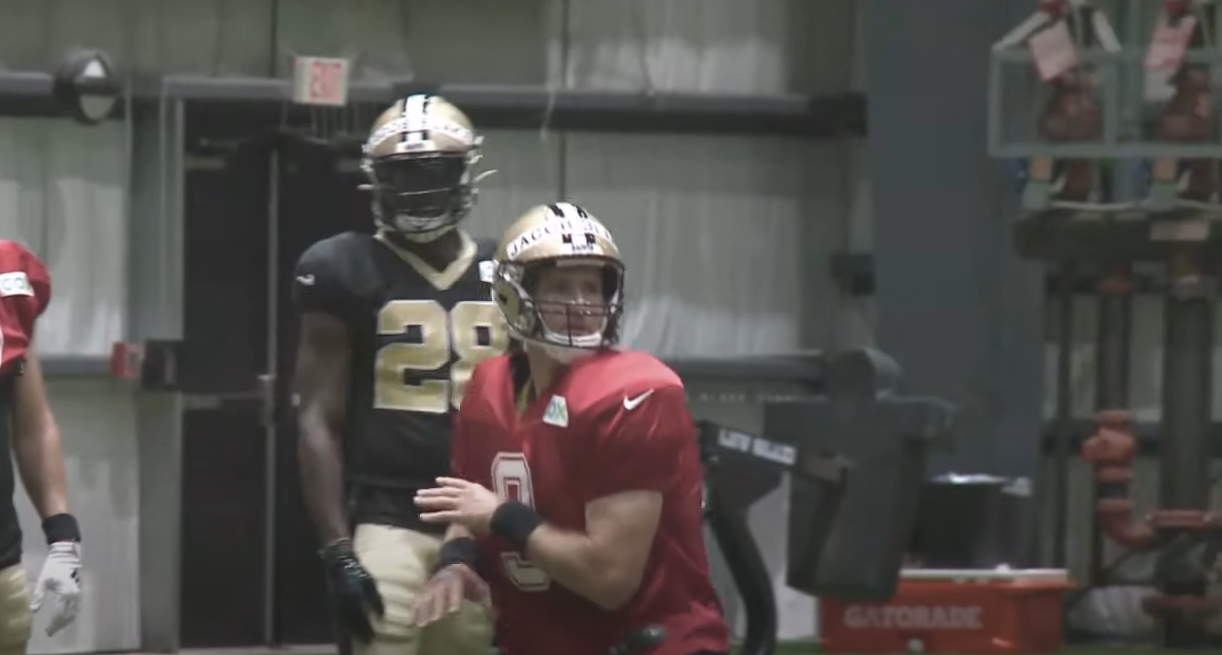 Drew Brees was spotted wearing the name of an accused rapist on his helmet during a practice game with his team.

The New Orleans Saints quarterback has come a long way since the day when he stood up to the NFL National Anthem protesters and their crusade against the United States and the American Flag.

Prior to the start of the season and during an interview with Yahoo! Finance, Brees was asked what he thought about NFL players kneeling during the National Anthem. Brees gained the respect of many on the Right when he said,

“I will never agree with anybody disrespecting the flag of the United States of America or our country.”

That stance quickly made Brees the target of the Left’s cancel culture on social media and it only took one day for his spine to turn into wet linguini when he felt the pushback. The quarterback issued a follow-up statement that was nothing short of pandering to the Social Justice Warriors. It read, in part:

“I stand with the black community in the fight against systemic racial injustice and police brutality and support the creation of real policy change that will make a difference.

I condemn the years of oppression that have taken place throughout our black communities and still exists today.

I acknowledge that we as Americans, including myself, have not done enough to fight for that equality or to truly understand the struggles and plight of the black community.

I recognize that I am part of the solution and can be a leader for the black community in this movement.

I will never know what it’s like to be a black man or raise black children in America but I will work every day to put myself in those shoes and fight for what is right.

I have ALWAYS been an ally, never an enemy.

I am sick about the way my comments were perceived yesterday, but I take full responsibility and accountability. I recognize that I should do less talking and more listening…and when the black community is talking about their pain, we all need to listen.

For that, I am very sorry and I ask your forgiveness.”

Yet the situation became even more ridiculous when Brees was spotted in practice sporting the name of an accused rapist on his helmet.

Jacob Blake had a warrant for his arrest for allegedly sexually assaulting a woman and then taking her keys and stealing her car. The police were notified that he had violated the restraining order when they were notified of a domestic dispute at his alleged victim’s house.

When the responding officers arrived, Blake refused to comply with their orders, is seen on video fighting one officer and a taser from another officer failed to neutralize the threat. Blake then goes to the driver side of his car, with his kids in the back seat, and reaches in. The police are screaming at him to stop, but he ignores them. Presuming that he was grabbing a weapon, they opened fire and Blake was shot seven times in the back. There is video evidence to support these facts.

Jacob Blake is the name that Drew Brees and his fellow teammates chose to wear on their helmets. An accused rapist who was shot as he was fighting with police officers. Perhaps Drew should do a little bit more research before he puts his support behind the next violent criminal and accused rapist that the Left tells him to support.