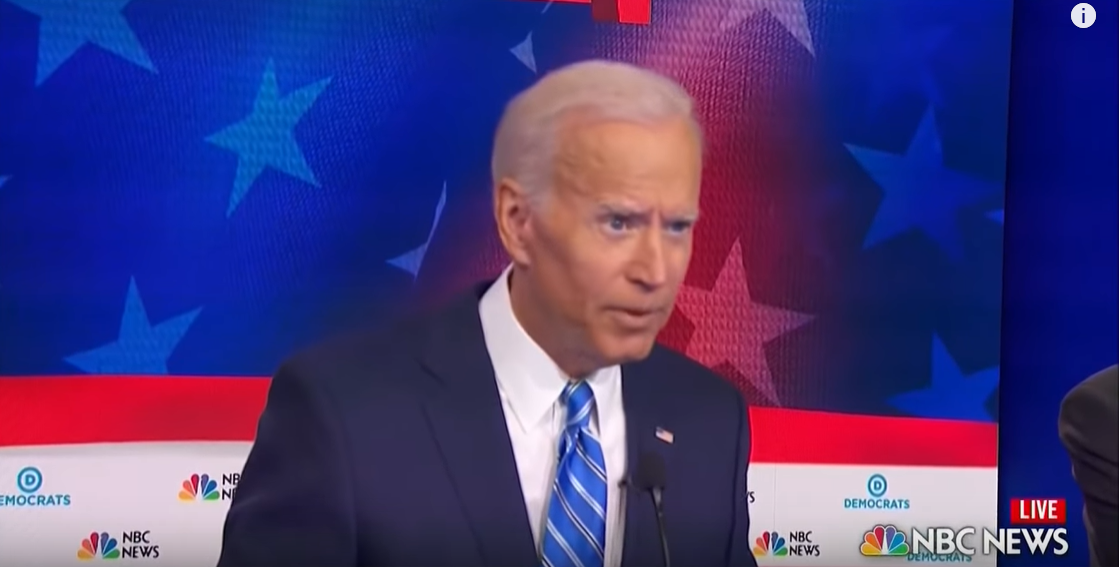 If you watched the second Democrat debate, hosted by Chuck Todd and Rachael Maddow, you might have noticed a brief exchange in which several of the candidates could not seem to follow the established rules of a particular question. The candidates were asked to answer a question, using only one or two words, but several used multiple paragraphs.

While many focused on the candidates being unable to follow the rules, there was one candidate who answered the question in a way that seemed to suggest he was not paying attention at all. It was this specific question that former Vice President Joe Biden seemed to live up to President Trump’s nickname for him: “Sleepy Joe.”

Chuck Todd began the question by pointing out that President Barack Obama was only able to address a single campaign issue during his first year in office. Though he wanted to tackle health care and climate change, he was only able to get Congress to go along with health care.

Todd then asked the candidates, presuming that they are only able to tackle one issue during their first year in office, to list the issue that they hope to take on first. He stressed that the candidates only use one or two words.

“For Parkland, for Orlando, for every community affected by gun violence… ending gun violence.”

For those who have passed the first grade, you might have noticed that Swalwell used more than one or two words. The question called for the candidate to keep their answers brief. The appropriate answer would have been, “Ending gun violence,” or “Gun control.”

However, Swalwell was not the only candidate who ignored the rules. Moving down the line, the answers continued to get longer with Kamala Harris trying to cram her entire campaign agenda into the “one or two word” answer.

While this might be a petty critique of these answers, considering, for some candidates, this forum was one of the few opportunities to address a nationwide audience, it is Joe Biden who gave a lengthy and, quite frankly, bizarre answer.

Biden began by countering the notion that Barack Obama did not address climate change because the former president was able to bring the nations of the world together to sign the Paris Accords. It might have escaped Biden’s notice, but the question was regarding Obama’s first year in office and the Paris Accords were signed seven years into the Obama presidency.

Biden further continued to demonstrate that he did not understand the premise of the question when he stated his first agenda item that he wanted to accomplish during his first term as president.

“The first thing that I would do is make sure that we defeat Donald Trump!”

In other words, if Biden were to defeat President Trump in the 2020 election, the first thing that a President Biden would do is defeat the guy he just defeated?

It could also be a matter of Biden indicating that his first action as president is to continue the Obama administration policy of weaponizing the federal government against political enemies. Perhaps Biden is hoping to use DNC-funded opposition research to obtain FISA warrants to spy on Donald Trump when he becomes a private citizen again. Who knows.

What we do know is that, for whatever the reason he answered the question in the way he did, Joe Biden lived up to the moniker, “Sleepy Joe.”

You can watch the clip of the exchange below: