If you have been following the news, you might have heard a lot of talk about hedge funds, stocks, and Game Stop.

Over the course of a short period of time a company called Game Stop watched its stocks skyrocket due to some “community organizing” on Reddit and some people on Wall Street lost a lot of money.

So the question is, what happened?

Here is what you need to know:

Hedge fund managers can make money by predicting that a stock will perform poorly. The way that they do this is a little complex, but we will break it down for you.

Let’s say that we have a hedge fund manager named Jimmy. Jimmy is looking at a stock called ABC (of no relation to Amerisource Bergen Corp). Let’s say that the stock is sitting at $100 and Jimmy has a feeling that the price is going to drop over the next month. Jimmy is going to borrow that stock from a broker, pay a small service fee, and then try to sell it to someone else. At the end of the term, in this case a month, Jimmy is going to have to return that stock to the broker for the price that he borrowed it at.

The person that Jimmy sold the stock to has given Jimmy $100 for the borrowed stock. Jimmy, predicting that the stock’s price is going to fall, will then buy back that stock just before he is scheduled to return it. If all goes according to plan, Jimmy buys back the stock at a lower price than what he sold it for. Were he to buy back the stock at, say $30, Jimmy has just cleared $70 per stock that he was betting on. He returns the stocks back to the broker, and he keeps the profits.

Now, Game Stop is a company that is known for buying video games and video game related items for cheap and selling them, used, to consumers for a marked up price. It’s a win/win business model as the company collects a profit off of every sale and the consumer gets to play games for much less than they would if they were to pay the full retail price for a brand new game. Gamers, who are tired of their old games, can sell back what they don’t play and put the money towards getting new games.

In September, just before the release of the latest Playstation console, the Playstation 5, some users on Reddit noticed that the price of Game Stop was sitting at around $4-5 per share. This might be explainable as many people who play video games buy digital versions of their games rather than purchasing physical discs. Much like Blockbuster went the way of the dinosaur as people began streaming their movies, some have been predicting that Game Stop’s business model is unsustainable.

This might be a good time to buy, Redditors suggested, because the release of the new console would mean that the price of Game Stop shares could rise. In the stock market, good practice is to buy low and sell high.

A large number of regular Joes then flooded the stock market with purchases of Game Stop stock, driving up the price of the stock. What started as an effort to make a little money on the side turned into an attack on the wallets of hedge fund managers who make money off of short selling stocks.

Towards the end of January, Game Stop stock was closing out at over $300. The plan had reportedly made some members of the Reddit community millionaires overnight.

Now, let’s go back to our hedge fund manager, Jimmy. Jimmy borrows Game Stop stock with the expectation that the price is going to continue to decrease. When Redditors drove up the price of the stock, Jimmy still needs to buy back the stock at whatever price it is at and return it to the broker that he borrowed it from.

For example, if Jimmy bought 6 shares at $20, he must sell those shares back to the broker at $20 per share at the end of his borrowing term. Should his term end while the stock is over $300, Jimmy is now out at least $280 per share. At six shares, he has just suffered a loss of $1,680.

To make matters worse, for Jimmy, the Reddit community was calling for its members to hang on to their shares and not sell in order to sustain the high price of the stocks and/or drive the price up further. Multiple memes were created to promote the idea of holding: 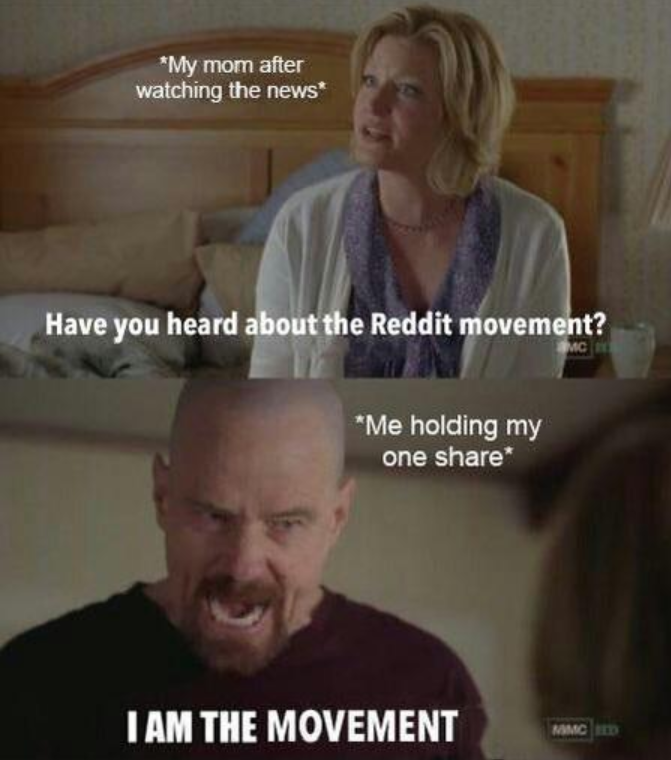 While that is bad news enough for Jimmy, think about the fact that many hedge fund managers deal with large numbers of shares at a time. Think about our example of six shares and then multiply that buy thousands or even millions of shares.

It is estimated that Wall Street hedge fund managers lost billions of dollars with the “Game Stonk” situation.

Members of the community have already made plans to repeat the event with other stocks.