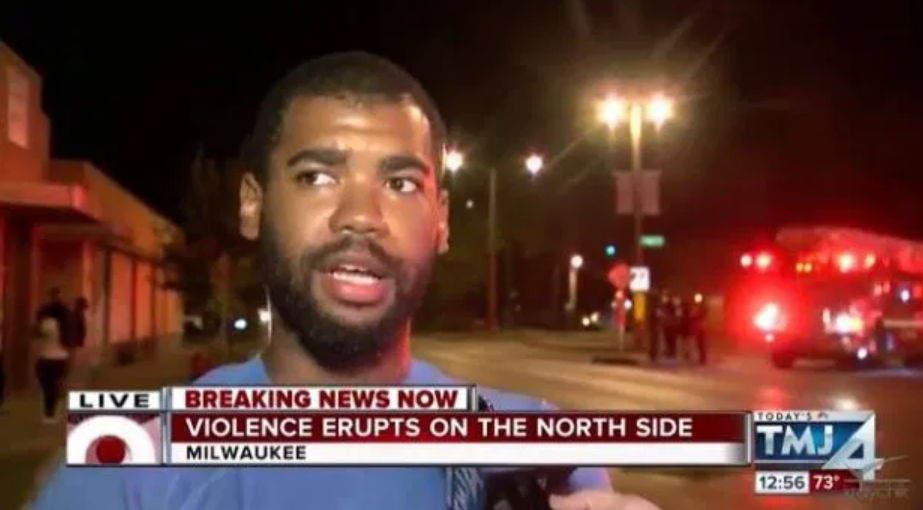 Nobody has accused the rioters and protesters of Milwaukee of being too bright, and 24-year-old Orlandus Jackson takes that thought to a whole new level.

Jackson was interviewed by TMJ4, and was asked what was going through his mind when he heard about the  police involved shooting of a black man who was armed with a stolen firearm, and the violent protests that followed.

“It’s sad, because, you know, this is what happen because they not helping the black community.

So what we have learned from one of the Milwaukee protesters so far, is that the reason there is looting in the communities, is because the rich people have “all this money,” and they are not trying to give the looters any.

Isn’t there a major political party, in America right now, that is pushing the notion of there being two Americas. An America of the rich, where all the money is, and then an America of the poor, where people can’t get ahead because of the rich?

It almost sounds like Jackson is buying into the Socialist and Democratic Parties’ narratives of class warfare.

Jackson then goes on to comment on the police involved shooting in Milwaukee:

Jackson was asked what he thought about the looters in the area, who were using the death of a black man to justify destroying people’s livelihoods.

Then me and my mom, you know, we drove over here and seen what happened.”

So… in Milwaukee, there are people who hear about a person being killed, have no information about the situation, and decide to grab their mom to visit the scene of the murder.

The saddest part about all of this is actually that there are individuals who think Jackson’s incoherent and nonsensical statements actually make sense.