The sports magazine opted to provide a photo shoot of a Somali-American model named Halima Aden wearing a body-covering burkini as some sort of history-breaking statement about women empowerment.

Understandably, the idea was laughed at by people across all walks of life, but none did it better than the Babylon Bee.

The Bee’s take on the issue was to publish a satirical article that featured Sports Illustrated’s next “hot photo-shoot.”

Via the Babylon Bee:

Becky Grace-Charity-Faith Benson is the “first ever Baptist swimsuit model, pictured in a floor-length denim skirt, modest collared blouse, and no makeup or jewelry whatsoever, other than her purity ring.” 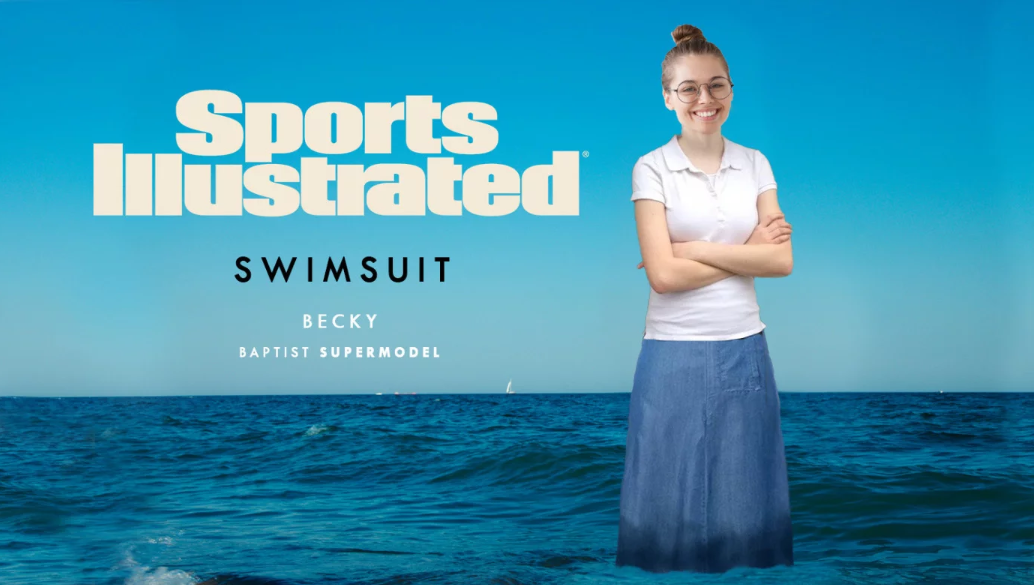 But more to the point, the Bee gets to the heart of the problem with Sports Illustrated’s latest swimsuit edition. The problem is actually two-fold:

Number one, what has always been the purpose of the annual swimsuit edition of the sports magazine? Historically speaking, it’s always been (to put it bluntly) to provide eye candy for men. That’s always been the goal. It’s also why the swimsuits, over the years, have become skimpier and skimpier as well as, in some cases, more transparent.

The running joke has been that men read the swimsuit edition for the articles and that they could care less about the voluptuous breasts featured within. As if men are interested that Cindy from Idaho likes puppies and traveling. Or that Cinnamon from New Jersey is studying to be a doctor and only does modeling on the side. Or that they share Magnolia from California’s concern over the plight of whatever endangered species in some far off land.

There have been more than a few anecdotal stories few men whose wives have “redacted” the photos in the swimsuit edition with a black marker or a pair of scissors so that their husbands are left with only the articles that they say they are interested in.

The swimsuit edition issue could be described as a watered down version of a smut magazine. Nothing more and nothing less.

The hijab photo-shoot seems to indicate that Sports Illustrated is interested in taking their magazine in a new direction. The idea seems to be to show off a brilliantly colored burkini and jewelry as if it were some sort of fashion magazine.

The problem is, most men who purchase the swimsuit edition could not care less about fashion trends. Again, to put it bluntly, they buy these magazines to see half naked women.

The second issue with the swimsuit edition is the message that it seems to indicate a phenomenon that is occurring in Western society. The only religion that is protected and promoted by the SJWs and the Progressives of society is Islam. All other religions and cultures can be mocked and belittled.

This is not a statement for or against the religion as a whole, but merely an observation. Why do you suppose we will never see the Babylon Bee’s Baptist supermodel gracing the covers of Sports Illustrated? What about a nun in her habit? Perhaps an Amish woman wearing plain clothes or even a Jewish woman wearing a tallit and tefillin?

If this is only about creating a historic photo-shoot that empowers women and not another attempt to advance an agenda, then why is Islamic garb considered to be trend-setting and hot while every other religious garb is not?

The answer seems obvious, but we’ll leave you to come to your own conclusions.