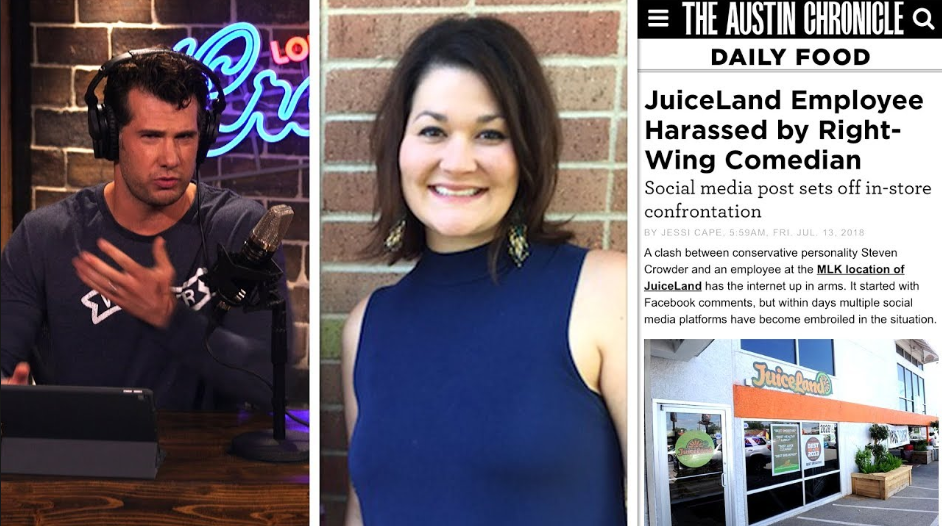 Conservative political commentator Steven Crowder, of Louderwithcrowder.com, has released an amazing video that flat-out exposes a case that, at best, could easily be argued to be journalistic malpractice while, at worst, could be seen as political activism disguised as journalism.

Since the election of Donald Trump, the term “fake news” has been a staple when trying to analyse current events.

Though the term was originally tossed out as one of dozens of excuses as to why Hillary Clinton lost the presidential election (none of which had anything to do with her being one of the worst candidates ever), fake news was quickly co-opted by those on the political Right to explain the state of modern journalism.

Suddenly, CNN’s breathless “bombshells” that Donald Trump gets an extra scoop of ice-cream when he entertains guests, or their analysis that he may be unfit for office because he drinks a dozen Diet Cokes per day has turned these Left-leaning networks into literal punchlines.

The credibility of the once-trusted source of news about current events has become less than that of the tabloids talking about “toad-boy” and Elvis sightings at the checkout counter.

What has contributed to this fake news cultured?

Steven Crowder might just have the answer, and though it’s anecdotal, it serves the purpose of possibly explaining the problem with what modern journalism has become.

First of all, to provide a little context behind the video, this entire situation began when Crowder traveled to Austin Texas to film a Change My Mind segment for his online podcast. These segments involve Crowder sitting down in public and encouraging anyone walking by to sit down and have a civil discussion where they are allowed the opportunity to change Crowder’s mind on a given subject.

This particular Change My Mind episode started with the premise that there are only two genders.

It was during this filming that a transsexual political activist, who openly admits to vandalizing a Robert E Lee statue, began posting threats against Crowder, warning him not to show his face in public or leave himself vulnerable. The social media posts also included threats to slash the Louder With Crowder crew’s tires.

Though it rarely happens, Crowder took the opportunity to track down the agitated Left-wing activist and confront them in person with their own posts.

The man/woman calling for violence in question was working at a JuiceLand establishment.

Crowder, with the film rolling, entered the workplace with poster-board covered with the activist’s posts, and asked that the person take them down.

Crowder repeatedly told the individual that he was not calling for violence, and that if the posts were taken down, that would be the end of it.

The person refused to take down the posts and the police were eventually called to escort Crowder and his team out of the establishment.

That’s the background of the case.

From there, the Austin Chronicle’s Jessi Cape ran an obviously biased hit-piece against Steven Crowder without, according to an admission from Cape that can be heard in the video below, making a genuine effort to reach out to Crowder for any comment on his side of the story.

The following is a half-hour long conversation that Steven Crowder has with the Chronicle’s journalist in which he confronts her about her piece’s inaccuracies.

Take a look at the Crowder Confronts video below, and you might have an idea as to why journalism is in the state that it is today:

To be clear, this is not meant as a criticism of the Austin Chronicle or even this particular journalist. This type of activism disguised as journalism is just a problem that the entire industry is having to deal with in one form or another.

Opinion pieces are just fine as long as they are clearly marked as opinion pieces. The danger comes when news outlets try to pass opinions off as facts.

From “anonymous sources” who are providing false information to support political agendas to a complete lack of journalistic curiosity or interest when it comes to anything that would be harmful to a particular political party, the Mainstream Media proves time and time again that Fake News is alive and well.