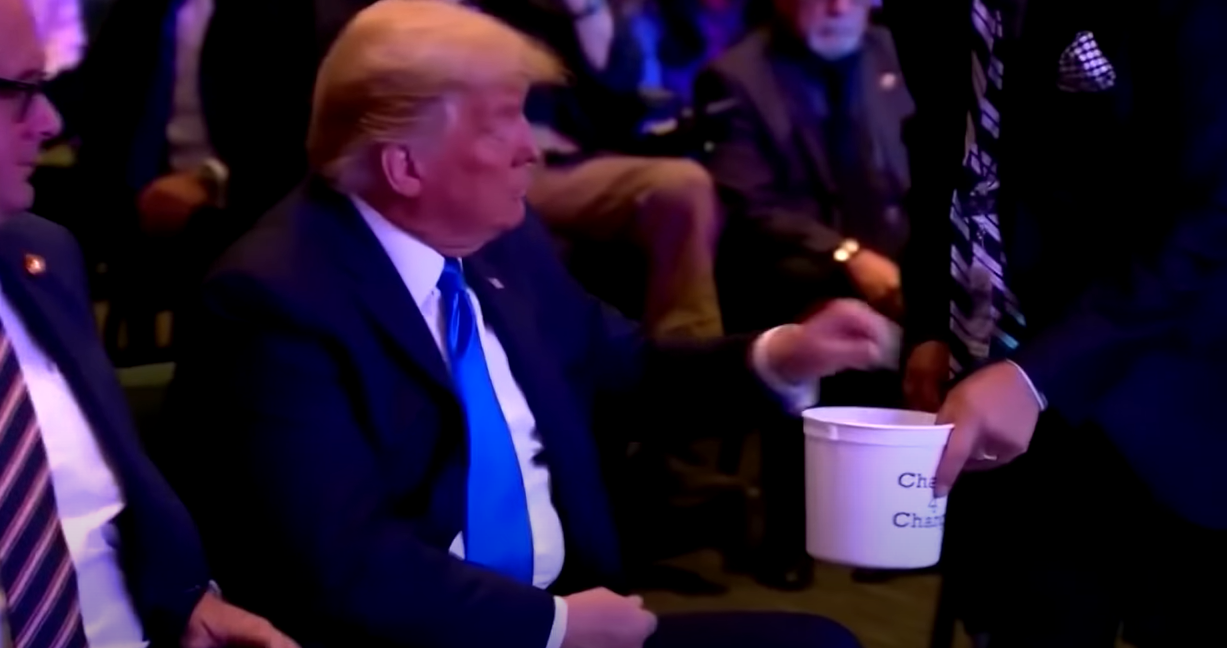 Twitter was aflame with outrage after a video was spread of President Trump donating a wad of what looked to be 20-dollar-bills into the collection basket during his visit to the International Church of Las Vegas.

As expected, any time President Trump does anything, Leftists suffering from Trump Derangement Syndrome have found some things to complain about.

The complaint Tweets began fluttering, with some griping that Trump, a billionaire, did not give enough.

“Breaking News. My husband and I love our church. I hate having to put this on twitter BUT since we cannot stomach tRump I will. We tithe weekly to our church and our tithing each week is more then what tRump handed over to this church. tRump is a suppose to be a Billionaire.”  –Twitter

See what she did there? She put a lower-case “t” and a capital “R” to emphasize the word “Rump” in the president’s last name. Because a rump is another word for someone’s backside. Get it? Get it? Oh, Leftists can be so clever with their grade-school level political discourse.

Never you mind the fact that the collection plate is not meant to be a contest to see who gives more. You don’t get extra spiritual points by donating more.

Others complained that the president was only using the situation for a photo op:

“That’s all for show. When I go to church I already know the exact amount I’m going to give, no need to count it. It’s ready to go when the basket comes around. I don’t need to flaunt the amount and count and play w money like I’m 5. I’m too busy paying attention to the sermon.” –Twitter

There is literally nothing that the president could do that the Left would come out and praise. Even his donation to the collection basket is examined, measured, and criticized.

Donald Trump could run into a burning building and save a child and the Left would accuse him of doing it for a photo op while CNN and the rest of the Mainstream Media would would have panels of “experts” explaining to the viewers why the action constituted kidnapping while others criticized him for not following social distancing guidelines.

The absolute hatred from those on the Left towards the president is astounding. Outside of when the Republican Party went to war and took away their slaves, it’s hard to imagine a period in history when the Democratic Party of the United States was so triggered.