“Today’s censorship by Facebook. ‘Reduced Distribution.’ It’s no coincidence that the election is just weeks away,” said a post on the Tucker Carlson Tonight Facebook page Thursday. The post contained a screenshot of a notice from Facebook warning Carlson that his page’s reach is getting limited due to consistently sharing fake news.

“Your page has reduced distribution and other restrictions because of repeated sharing of false news,” Facebook’s warning noted. “People will also be able to see if a Page has a history of sharing false news.” 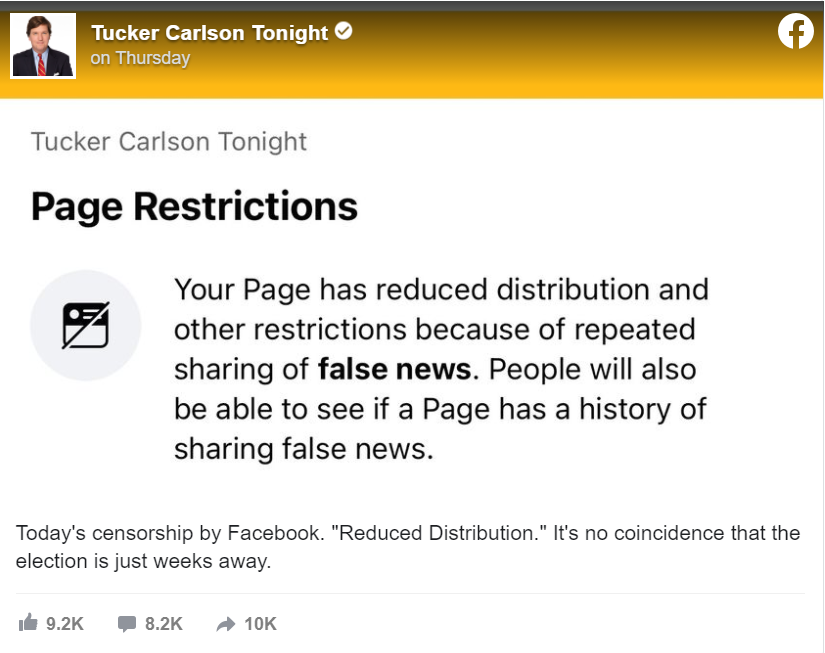 Facebook has not responded to the Daily Caller News Foundation’s request for comment nor has the company provided examples of the false news Carlson’s account supposedly shared.

Facebook’s move came after Carlson aired a Sept. 17  piece on “Tucker Carlson Tonight” alleging the mayor of Nashville hid low numbers of coronavirus rates linked to bars and restaurants from the public so the mayor could justify keeping local businesses closed.

Carlson, co-founder of the Daily Caller, based the commentary on a report from Nashville Fox affiliate, which obtained “leaked emails” that supposedly revealed the ruse.

“Hide all good news — that’s the policy,” Carlson said during the show, referring to what he believed at the time was a political strategy designed to stoke fear about the coronavirus pandemic. “Otherwise, the fear might subside and our power along with it.”

A subsequent Sept. 18 fact check from The Nashville Tennessean reported that the Fox affiliate’s report left out critical context.

The data was kept private for fear that it could reveal the names of people who test positive for COVID-19, the mayor’s office said, the Associated Press reported Sept. 21. Such a move would violate federal privacy laws, and the total number of cases linked to bars and other eateries was publicly revealed at the time in separate media reports, the AP reported.

The Fox affiliate removed the story from its website, according to a Sept. 19 CNN report.

“In a segment that aired earlier this week, we incorrectly asserted that Mayor Cooper’s office withheld COVID-19 data from the public, which implied that there had been a cover up. We want to clarify that we do not believe there was any cover-up, and we apologize for the error and oversight in our reporting,” the station said in a press statement addressing the report.

Carlson told viewers on Sept. 21 that the Fox affiliate had removed the story “under pressure from the mayor’s office.” He added: “We don’t know the truth” about the leaked emails for which the report is based.