Antifa has taken to celebration over the fact that a member of their network, which doesn’t exist other than as an idea according to Joe Biden, had murdered what they believed to be a supporter of Blue Lives Matter.

Andy Ngo, a journalist who was brutally assaulted by Antifa in 2019, has done an amazing job of chronicling the violence and criminal acts committed by Antifa.

On the eve in which a pro-Trump caravan drove through Portland, dubbed the “Trump 2020 Cruise Rally,” 20-year old Aaron Danielson was shot and killed by a self-identified member of Antifa.

Antifa, which is still allowed to organize their violent rallies through social media, celebrated the murder of one of their political enemies on social media: 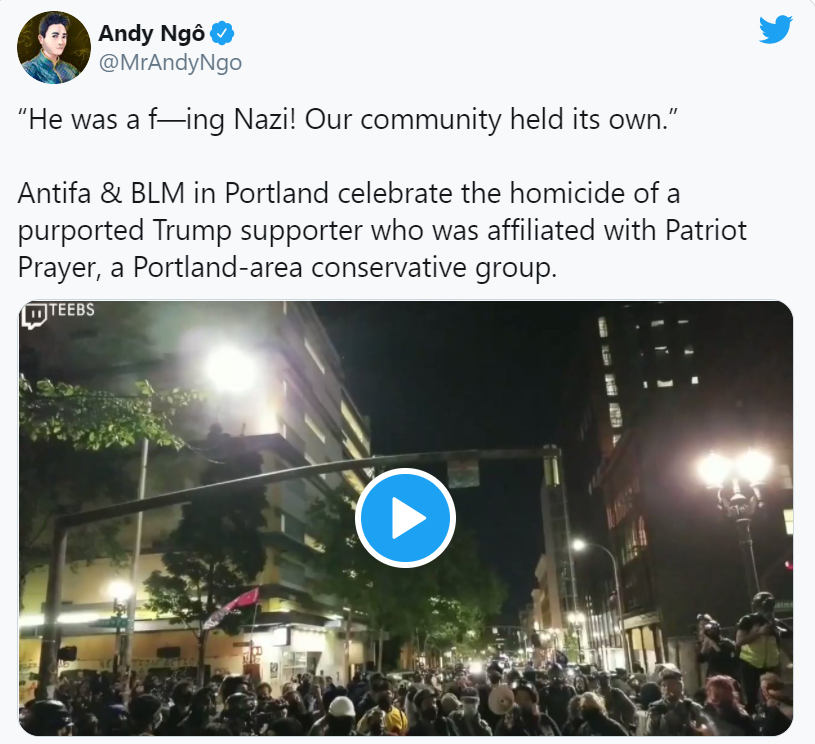 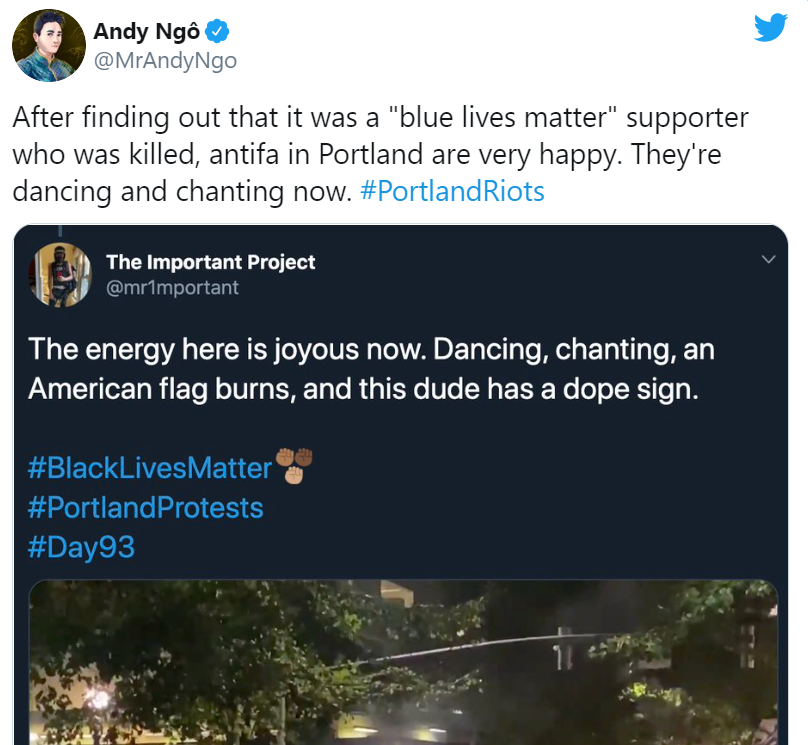 It is a common tactic for Antifa to label others as fascists or even Nazis with zero evidence. The idea is that violence is justified, even against a 77-year-old woman with a walker, as long as you call them a Nazi or a fascist first.

In the case of the Portland man who was killed during one of the city’s “mostly peaceful” demonstrations, the suspected gunman gave an interview to Vice News after the shooting.

According to the gunman, Michael Forest Reinoehl, the attack was done in self-defense. This is his recollection of the events leading up to the death of Danielson:

“I saw someone that is a dear and close friend of mine in the movement by himself basically confronting all these vehicles. And so I let him know that I’m here, parked my vehicle and joined up with him, found myself in the intersection in front of the food trucks surrounded by trucks and cars that had weapons.”

You can find his full interview HERE.

What a noble and courageous man to come to the defense of a close friend of his, a person of color by the way, who was surrounded by a group of armed Trump supporters in vehicles.

The only problem with his story is that there is actual footage of the shooting that was taken by someone recording the area at the time. In the video, the intersection is mostly empty. On the other side of the intersection, someone shouts,

Immediately following those words, two shots rang out. Police have said that the first shot hit a can of bear mace that Danielson had on him, causing a brief cloud, tinted green due to the nearby traffic lights, to appear. The second bullet struck the Portland man in the chest and he succumbed to his wounds.

Nowhere in the video do we see any roving gangs of Trump supporters, let alone a person of color defending themselves from an angry mob. It seems like, whether he believed his own versions of events or not, Reinoehl did not have a clear grasp on reality.

The alleged shooter was killed by federal agents just days later as they tried to make the arrest. You can watch the video of the incident HERE. We will not include the video in this article due to the fact that it shows somebody being killed, even if it is from a distance.  But you can click on the above link if you’d like to compare what Antifa says happened with what the video evidence says happened.

But don’t worry, Jerry Nadler (D-NY) has assured the American people that Antifa violence is a “myth.”