Nothing says “mostly peaceful” demonstration more than constructing a device that became the symbol of the French Revolution’s “Reign of Terror” and placing that outside of the home of an American citizen.

That’s exactly what activists did when they built a guillotine, a device used to decapitate its victims, outside of the home of Amazon CEO Jeff Bezos. 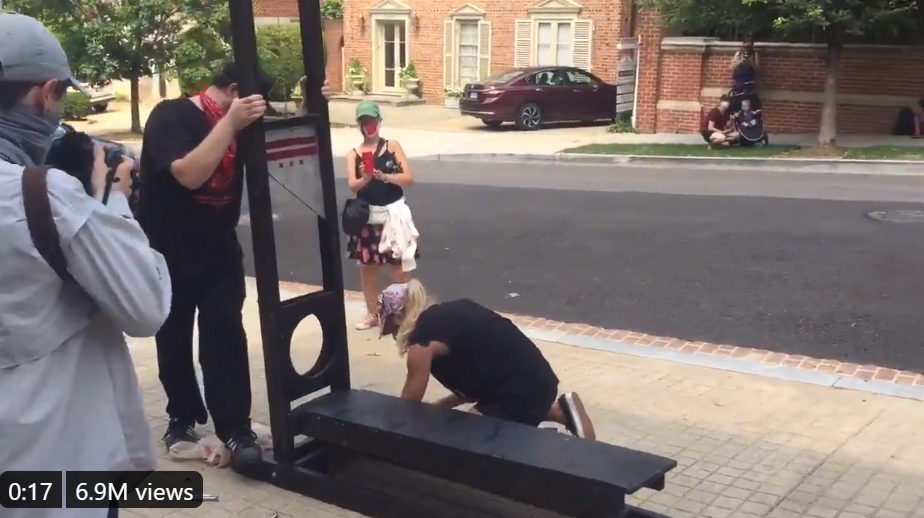 According to the activists, the guillotine was meant to pressure Bezos into raising the minimum wage for all Amazon workers to $30 per hour. Can you think of anything else that screams Free Market and Capitalism like using threats of violence and murder to “convince” a boss to pay his employees more.

Remember the good old days, a couple years ago, when the Left was demanding that all workers be paid a minimum of $15 per hour as an appropriate minimum wage? Those goals have already been achieved at Amazon as the company has agreed to pay each of its employees the desired minimum.

Mission accomplished. They can now go protest something else, right?

No. Because the Left is forever in a state of unhappiness where nothing brings them satisfaction except for the ability to complain and explain how they are victims.

After receiving their requested $15 per hour, the Left is now demanding that Bezos pay his workers a minimum of $30 per hour. Guess what would likely happen if he gave in and started paying them their desired $30…

The guillotine is an interesting choice of intimidation as well. The device was used as a favorite source of execution for revolutionist Maximilien Robespierre. It was also said that, during the “Reign of Terror,” the guillotine never stopped as more and more people were convicted and executed by the revolutionists. Robespierre himself eventually found himself relieved of his head through the same device he used to punish his political enemies.

These Left-wing activists could have chosen anything they wanted to protest Amazon’s CEO. They could have marched with professionally created signs. They could have thrown Molotov cocktails in what CNN would describe as a “fiery but mostly peaceful protest.” They could have stood in a line with their heads bowed and the iron fist of Communism held above their heads. They could have held die-ins, sit-ins, or even stood in Bezos’ street to prevent everyday Americans from going about their lives. All of these are tactics conducted by the Left in the past, and all of them were options available here.