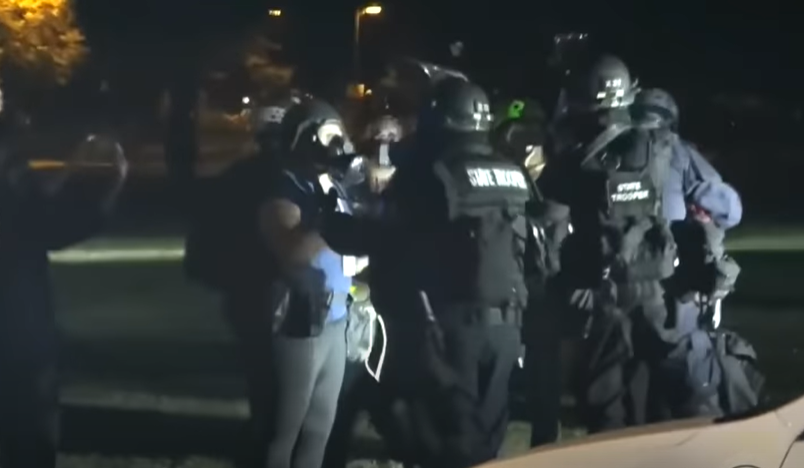 Nineteen arrests were made after a large mob of rioters tried setting fire to an apartment building with people still inside. After examining the standard set by CNN, we can safely say that these demonstrators were “fiery, but mostly peaceful.”

According to the Washington Times, the demonstration was held at an apartment building where Portland Mayor Ted Wheeler was believed to be living.

The crowd of around 150 “mostly peaceful” protesters began igniting fireworks and launching them into the building until, according to witness reports, they entered the building and stole furniture from the ground level. The demonstrators then used that furniture for kindling to create fires within the building.

Portland police officers say that city officials had given them orders to “hold back” and “deescalate” the situation. However, once the fires were started inside the occupied building, the police were quick to administer crowd control techniques to disperse the angry mob.

The night’s arson is just another example of members of the Communist movement known as Antifa and the Marxist organization known as Black Lives Matter doing what they do best: destroying property and terrorizing communities.

Imagine what would have happened had the fire taken hold and the apartment building had gone up in flames. What would the Mainstream Media have said about the blaze that likely would have taken the lives of innocent civilians?

It’s an almost certainty that some networks would immediately attempt to blame President Trump for the arson. They would likely give no examples to back up the claim other than to tell  their viewers that Trump’s rhetoric was divisive and that it was he who was encouraging the violence.

It would never occur to the networks to blame the Democrats for their repeated calls for violent demonstrations over the last four years. Nor would they think to blame Kamala Harris and other prominent Democrats for fundraising to collect bail money for the rioters when they are arrested. It certainly wouldn’t occur to them to blame certain district attorneys for selectively enforcing the law when it comes to Leftist rioters or the Portland Mayor for encouraging “mostly peaceful” demonstrations.

None of that would would cross the mind of anyone in the Mainstream Media. The only thing they would focus on is how a mass casualty as a result of Leftists rioting is somehow or another the fault of Donald Trump.