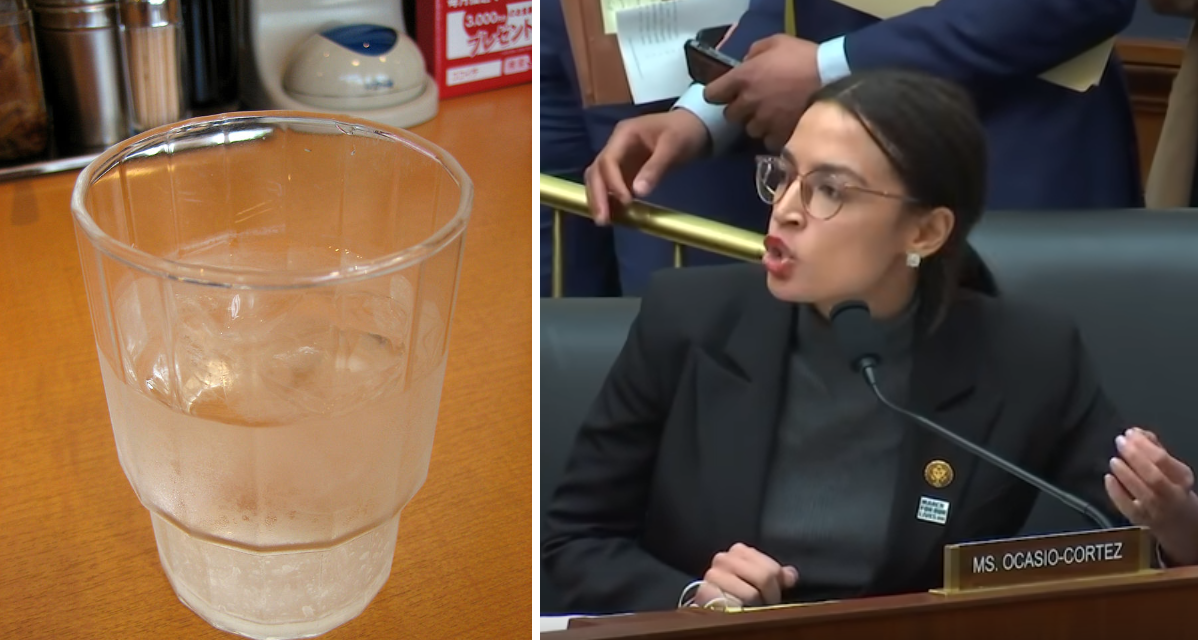 The “Fresh Face” of the Democratic Party, Alexandria Ocasio-Cortez (AOC), may find her congressional seat in jeopardy as a new challenger has emerged after announcing a 2020 challenge for AOC’s coveted seat.

Glass of Water made the announcement to a cheering crowd of supporters, Monday, at Morningside Park in Manhattan.

“I never thought I would run for public office,” began Glass of Water. “But after I heard Speaker of the House Nancy Pelosi (D-CA) suggest that someone like me with a ‘D’ next to my name has a shot at winning Ocasio-Cortez’ district… I just felt like I had to put my name in the ring.”

Glass of Water is making a reference to remarks made by Pelosi to the Associated Press about the junior congresswoman from New York’s voting base,

“She’s a wonderful member of Congress as I think all of our colleagues will attest. But those are districts that are solidly Democratic.

This glass of water would win with a ‘D’ next to its name in those districts.”

The Speaker of the House did not clarify whether or not the voters of New York’s 14th District would vote for a glass of water with a ‘D’ next to its name out of loyalty to the Democrat Party or out of a simple lack of political knowledge, but what is clear is that the comment inspired one New York resident to take the challenge.

Glass of Water has never held political office before, and has no life accomplishments to speak of, but Glass of Water still feels confident that there is a pathway to victory,

“I feel that I am just as qualified to represent the good people of New York.

Before she took office, AOC was slinging booze at a bar, quenching people’s thirst and I… well… come on people. I’m a Glass of Water. Nobody knows more about quenching someone’s thirst than I.”

Glass of Water also took time in the announcement speech to voice agreement with the non-gender agenda shared with AOC.

“I am a Glass of Water,” said the candidate. “I am not a male and I am not a female. In that regard, I think I am in complete agreement with Alexandria.”

Glass of Water’s remarks were in reference to AOC’s efforts to use the non-gender specific identifier “Latin-X” rather than the traditional “Latina.”

The announcement speech continued as Glass of Water’s political platform was laid out,

“If New York City sends me to Congress, I promise that I will confiscate even more private wealth from the American people than Ocasio-Cortez could ever dream.

A breathing tax, a farting tax, a texting tax, a driving tax, a sleeping tax… If you can think of something that people do on a regular basis, I’m going to tax it.

Because that’s the job of the government.

I’m going to ensure that it’s impossible for another millionaire to be created in the United States.

I’m going to tax the people of my district to such a degree that AOC’s 70% marginal tax rate is going to look like chump change.”

Glass of Water finished the announcement speech with a personal dig on AOC’s confusion and fear displayed towards common modern-day appliances,

“AOC said she was was terrified when she turned on the garbage disposal,” said Glass of water to a laughing crowd. “My contents have been through the garbage disposal many times over and I can tell you that I have never been afraid. Vote for me, New York City, a Glass of Water with a ‘D’ next to the name!”